In the arb world it sometimes seems a new tree disease is threatening the uk’s tree stock every week.

That might be a slight exaggeration but at times it really feels like it. We’ve had a lot of issues with pests and diseases being imported by unscrupulous nurseries with non-existant bio-security policies, and thanks to eu policy we can’t stop them because it inhibits free trade.

But are these diseases really the death kneel for tree stocks and should we really be reaching for the chainsaws at the first signs?

There’s no denying that some pests and diseases can wipe out certain species in a short period of time, if we ever get emerald ash borer in the uk then that really might be the end of Ash in the uk, but how many of these are over exaggerated by unscrupulous, or uneducated, tree companies and need instantly removing at the first signs?

I can remember when bleeding canker became heavily established in the uk. It was pushed as the death kneel for horse chestnuts, and this nasty phytophra would wipe them all out in years. Now we know that its actually a bacterial infection not a fungus that causes most cases and that removal of infected trees might not be the answer. 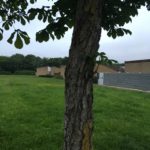 heavy lesions and every sign of bleeding canker, their still standing and still living. Bear in mind this is an area with significant foot fall, managed by two companies that are removing a large amount of “declining” trees in a city associated with knife making steel.

The canopies are full and while the trunks might look unsightly, the lesions and scars haven’t girdled the stem and the vascular system still seems to be doing its job. 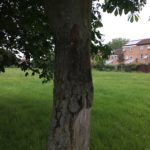 In fact one of them has a huge scar of missing bark to go with all its other issues, but it’s still here and still trying.

So should we instantly reach for the saw at the first sign of disease?

If these examples are anything to go by then perhaps we should ease back on pests disease and fungus being the death warrant and look at each case on its individual situation.  Trees have an immune system the same as we do and if given a chance, and maybe a bit of an immune system boost, then there’s a good chance they can live to fight another day. There’s significant sums spent on fighting disease in other plant based industries so perhaps it’s time for the uk arb industry to start offering alternatives, stop acting like victorian doctors and hacking lumps off at the first sign of trouble and start being a modern foward thinking industry that we claim to be.

1 thought on “Are tree diseases really an instant call for the chainsaw.”